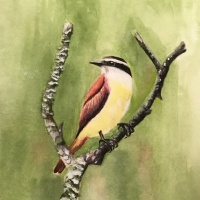 the world according to channie

In the villages, when a girl get married, she got to be a virgin. If you is not a virgin, if you mother-in-law nah see a spot of red virgin blood on the bed sheet on the morning after the wedding night, you just got to go back to you mooma and daadie house. Big scandal. Story done. Wedding bruk up. You nah good. You tek maan before you married. Eh heh!

Well, big wedding plan in dis faamily. Plenty food cook fuh all the people what get invite. Ceremony done, and de bride gone up to she bedroom fuh change into she wedding dress fuh go with the dulha and he baraat to the dulhaa house. They gun have more celebration there too.

Eh! Eh! While she getting dress, she mooma come in the room. She ask everybody in the room fuh go out till she call them in back. She now tek out wan small bottle from she pocket full of something. She tell she daughtah something quiet and easy in the gyal ears. De daughtah tek de bottle and push it in she bra right down, down, nice and tight. Nobady ent gun see dat bottle.

Everybody throwing rice and flowah and teasing the dulhan and the dulha and swan. Dulhan bend she head and smile.
Eh! Eh! Mooma smiling up too. If you see she face. She happy. Everything aarite.
Then…..the bride lil niece come fuh get wan lass hug and kiss. De bride bend ovah fuh kiss de lil pickney.

Braddaps! The bottle fall out from the bra and bruk pan de concrete step and red chicken blood pitch up on the white wedding frock.

Baraat – bridegroom’s friends accompanying him to the ceremony

Rural Legends and Tales: # 2 – Visit to the Ring-Maan (A true-true story)

De ring did get wan big, black stone that fix into it. People seh dat if you gat problem and you look in de stone, you does know wah fuh do. The stone does be like TV. But nah everybady can see ting in de ring, though. The pandit who own dis ring seh dat only young, lil pickney dem can see ting in dis ring.
Pandit RING-MAAN got to get pay fuh leh you see ting in this ring. Pandit is wan business man. Weekend does be busy time.

De people who live in the village got to ketch de bus and go to the stelling and wait fuh de steamah come back from the opposite bank fuh them go over de rivah. Then they gat to ketch wan bus or cyar fuh go to the village weh Pandit RING MAAN live. Laaang trip. Tek whole day fuh go and reach back home. Only important ting guh mek you leff house fuh guh to see Pandit RING MAAN.

Trouble in the house now. Cha-Chee call husband, pickney, neighbor. All bady seh dem nah know nothing bout no money. Cha-Chee tie up she head-kerchief and put the knot in front over she forehead and she wailin and cryin and beatin she chess till afternoon. By this time, goldsmith gone he way with the necklace cause he know payment nah deh.

Ovah night, Cha-Chee hit on a plan. She gun go to Pandit RING MAAN fuh see is WHO teef she money. She dress she lil daughtah and she self, ketch cyar, cross de rivah with the steamah, ketch wan next cyar and go to Pandit house.

Pandit RING MAAN start asking all kine ah question.
Where dis money did hide. Who and who know bout it. How much people live in the house. Who does come, come in de house. If she see anybady spend money.. And swan, and swan.

Pandit put on de ring on he right index fingah and then he call de pickney in front ah he.
He seh “Tink about wah happen to you mooma and look in this stone and tell me wah you see.”

Cha-Chee lean forward waiting fuh hear who gun get it from she.

Stories – wild and scary, funny and astonishing, sad and tearful – abound in the rural villages of my country. They are calculated to scare, to warn, to teach, and to entertain, and even to mock those who fall from grace.

In these villages where are no libraries, no cinemas, no screens, the people find escape in coming together at weddings, religious festivities, funerals and the rum shops where they share stories.

Some of these stories may be considered allegories, metaphors for living. Many are true.
This is the first of a few I will relate. Each story will be published in a different blog.

Bear with the few instances of Creolese as I consider it the best medium for the telling.

Long time ago, in one of the far flung villages where life proceeded in mindless days of toil and sweat, there lived a family of husband, wife and children. Travel outside of the village, and strangers to the village were rare occurrences. The villages were self contained units. People existed on what they grew, bartered or managed to sell. Marriages were often arranged mainly with people from neighboring villages. Young girls just out of puberty, did not question their parents’ choice of a husband.

In this family, it was the same. However, there was a wild seed in the home. One of the daughters in the home was never pleased with any of the men chosen by her father. Each prospective bridegroom was turned down. This hopeful was too short, that one too illiterate, ugly, poor, not enough well dressed or employed. The father never gave up hope though.

However, one day there appeared in the village a young man – handsome, well dressed, soft spoken.

He was dressed in a suit and tie. He wore leather shoes, a hat, dark glasses. He swaggered.
He caught the eye of the picky-choosy young woman. Oh! she was enchanted. Her eyes and thoughts followed him. She decided that here was the ONE she was waiting for to be her husband for life.

He also looked on her with much favor. So they decided that since her father would never agree to this match with a stranger, they would elope (the villagers referred to it as “ get away”).
They got away and set up house together. They were mostly happy. He set himself out to please her in every way. She smiled and fawned on him and soon forgot her family.

Soon, she began to see strange changes in her husband. His eyes were always red and he changed his shape often – he had fangs and a long tail. His skin grew scales. She asked him about it and he was sorely angry.

To her amazement, and right before her eyes, this love of her life began changing his human shape into that of a camoudie snake. He pounced on her.and wrapped himself around her as is usual with his kind. She then realized that he was going to kill her and swallow her.

Oh! How she screamed and begged. As she was being slowly swallowed, she saw a man she knew from her childhood. She begged him to tell her father that her husband was not human, but a snake and that she was going to die.

As she was being swallowed, she sang this song…

when you go home gentleman

That the man I married

And then she was no more.